Musical journeys within and beyond

Orlando Chamber Choir’s voices reach out for the exotic, the distant and the barely-possible…

Centrepiece of the programme is Monteverdi's remarkable setting of Ariadne's lament, a masterpiece of psychological drama and a composition as legendary as the events it depicts. Having slain the mythical Minotaur, Ariadne and her lover Theseus rush back to Athens via the island of Naxos where, in the dark of night, Theseus abandons love for power and leaves Ariadne behind. She discovers his betrayal in the morning and, standing on the beach overlooking the empty ocean, laments his departure – before Cupid, Venus and Jupiter intervene to arrange her wedding to Bacchus, with immortality and a crown of stars for consolation.

British composers, too, wrote about extraordinary excursions to distant lands, although perhaps more metaphorically. Engaging in virtuosic word-painting unparalleled in the English repertoire, Weelkes observes that the wildness of the unknown is easily matched by the complexities of the human heart – which are explored further in compositions by Tomkins and Ward.

We vocally visit quieter scenes as well. Schütz takes us on a trip beyond time’s horizon, describing how a dying soul finds solace in cool shaded woods, and Melchior Franck imagines a delightful aromatic garden of love in his setting from the Song of Songs. Cornysh’s Woefully arrayed, with text by John Skelton, presents Christ showing the way to a new promised land – which, to end the programme with another glorious masterpiece, is represented by Monteverdi’s exquisite four-part mass.

Join us (and our wondrous Andalusian merchant, depicted below) for a journey above the Orient! 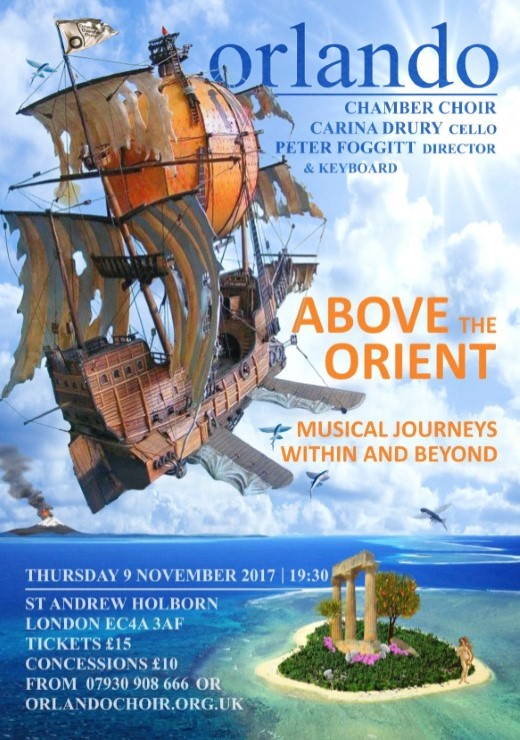